I also had the pleasure of interviewing the author. I proudly present my interview with Maureen McGowan, the author who gave Cinderella and Sleeping beauty a new, daring image.

THIS MISS: Cinderella and Lucette (Sleeping Beauty), your heroines from your two novels based on famous fairy-tales, are very brave, have an independent spirit and are quite capable of taking care of themselves. Do you think they can be an inspiration to young female readers of today?

MAUREEN: I hope so. If not an inspiration, I at least hope that my heroines aren’t generating negative messages. The traditional fairy tales are so much a part of western culture and it bothers me that while modern girls have so many more choices in life, those stories—in which the heroine sees marriage as the only way out of horrible circumstances, or needs a prince to wake her from a long nap—are still so standard.

I wanted to take the basic ideas of the fairy tales, but turn them on their heads. I decided to leave them in a fairly traditional “fantasy” setting, but update them both in terms of the words and the characters and the action.

THIS MISS: Cinderella is a ninja warrior and Lucette a vampire slayer. Have you always had an interest in ninjas and vampires, or is there any other reason you chose these "professions" for these two feisty heroines?

This one is kind of a funny story. I was actually approached by a freelance editor who had the idea of creating a series of updated fairy tales. I wanted to know where my boundaries would lie as a writer and storyteller if I chose to take on the project. The editor insisted that I’d have complete creative freedom, as long as the books appealed to younger teens as well as older readers, and to test her assertion I asked, “In Cinderella, can there be ninjas?” She answered, “Sure!” And although I was initially joking, I immediately imagined a scene with ninjas dropping from trees to attack Cinderella. That scene was the initial story spark, although readers only see that scene if they choose a specific route through the book.

With Sleeping Beauty, it was the title that came first. I was thinking about darkness and night and wondering how I could write a story in which the heroine is largely asleep… Darkness took me to vampires and very quickly to the title. I rarely work that way—creating a story to fit a title, rather than the other way around—but that’s pretty much what happened with Sleeping Beauty: Vampire Slayer. The instant I thought of the title, I knew I was onto something. I included the title as a possible second book in the series when we pitched Cinderella: Ninja Warrior (then entitled Not Your Mother’s Cinderella Story) to the publisher. The publisher re-titled Cinderella to make the titles fit together better.

THIS MISS: I love fairy-tales. Are you a fan of fairy-tales yourself? Do you have any favourite stories, heroines and princes?

MAUREEN: I think I like fairy tales now more than I did as a child. As a child, I had a deep fear of witches. That fear made sleeping after watching or reading fairy tales difficult. Although it’s one others rarely mention, and not romantic at all, I honestly remember loving Hansel and Gretel the best, but I think it was the image of them leaving the crumbs as a trail to find their way home, only to be thwarted by birds. That seemed like a life lesson to me. Always know your way home. :)

Wow, that makes me sound really cautious. I’m adventurous in many ways, but I do always make sure, no matter where I am in the world, I’ve got a way home.

THIS MISS: What was the main inspiration for these twisted tales?

My main inspiration was a desire to “fix” the traditional stories, so that the heroines were proactive and the stories didn’t send negative messages to young girls. I also wanted to make the stories fast-paced, adventurous and fun to read.
Those were my guiding principles and beyond that, I let my imagination run wild.
More specific inspirations… I already mentioned the image of ninjas for Cinderella, and with Sleeping Beauty: Vampire Slayer, early on I had an image of strangers watching a girl sleep. I thought that was really creepy and wanted to incorporate that into the story. How would someone feel if she knew others watched her in her sleep.

THIS MISS: The reader can actively participate when reading your novels because at the end of every chapter, they can choose a path they want the story to take. How did you come to decide for this option?

MAUREEN: The idea of doing updated fairy tales with a choose-your-own-adventure element was actually brought to me. I’m not sure I would have chosen to do the stories that way on my own. The only restriction I was given on structure was that the books had to be broken into nine sections and each section had to be the same length. (This was because of an earlier plan to bind the books with physical tabs. Turns out that restriction didn’t matter in the end as that plan was abandoned.)

I looked at a few other series with reader interaction and thought about following their patterns of wrong choices and/or multiple endings. But I decided I didn’t want to go that route for two main reasons. First, fairy tales by their nature promise happy endings—and pretty specific happy endings in some cases—so, I decided that each book in the series should have a single ending.

Second, I didn’t like the idea of “wrong” choices. The way I see things, each day we face choices, and the alternatives aren’t necessarily right or wrong—just different. Smart heroines (and smart readers) will make smart choices, so I wanted to present reasonable alternatives at each decision point without making it obvious which choice was better. Also, a capable heroine—even if she makes a mistake—should be able to face whatever challenges her choice places in her way.

When I decided on the structure, I didn’t realize what a difficult path I was laying out for myself as a writer! Because the books have alternate paths that loop into common sections, I had to be very careful to ensure the key story elements either: occurred in the common sections; or occurred in different ways but with similar outcomes, in the alternate paths. There were times while writing these books when my head was spinning so badly I didn’t know which end was up!

THIS MISS: If you could choose, which one of the two heroines would you be - Cinderella or Lucette? Why?

MAUREEN: I think I’d have to pick Cinderella. I admire how determined she is to escape her dire circumstances and would love to have some of her skills and talent. While I admire Lucette, as well, I’d hate to grow up with the cloud of a curse hanging over my head, and it would be so lonely—not to mention terrifying—to wake alone every night, knowing vampires were lurking about.

MAUREEN: A very squiggly line. :)
My writing process is slightly different for each book I write, but in general, it goes something like: Think, Scribble, Think, Scribble => Plan.
Write about half the book, realize I’ve come up with many things while writing that weren’t in the plan. Pull hair out. Regroup and decide whether new ideas make the story better or worse. Show it to a few key critique partners if I can’t decide.
Plan again.
Write to the end.
Revise.
Show it to critique partners.
Revise, revise, revise revise.

THIS MISS: Do you have more ideas for twisted tales in store? Can we look forward to another twisted tale? If so, which heroine(s) do you have in mind?

MAUREEN: I have lots of ideas for more twisted tales, but I can’t announce any firm plans for future releases at this point.

THIS MISS: Thank you very much, Maureen, for answering my questions in such a wonderful, in-depth way!

Now on to the GIVEAWAY!!!

Would you like to win a copy of Maureen's Twisted Tales?

Here are the rules:
* open to US and Canada only
* you do not have to be a follower of this blog to enter the giveaway
* enter by stating which book you'd like to have (Cinderella: Ninja Warrior or Sleeping Beauty: Vampire Slayer)and leave your e-mail address - it's as simple as that
* giveaway ends May 20th 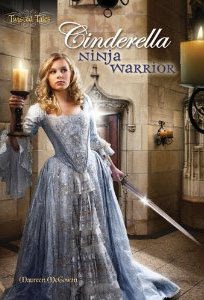 In this fast-paced story full of adventure and romance, Cinderella is more than just a servant girl waiting for her prince—she's a tough, fearless girl who is capable of taking charge of a dangerous situation. Seeking to escape the clutches of her evil stepmother, Cinderella perfects her ninja skills and magic talents in secret, waiting for the day when she can break free and live happily ever after. In a special twist, readers have the opportunity to make key decisions for Cinderella and decide where she goes next—but no matter the choice; the result is a story unlike any fairy tale you've ever read!

In this thrilling story full of adventure and romance, Sleeping Beauty is more than just a lonely princess waiting for her prince—she's a brave, tenacious girl who never backs down from a challenge. With vampire-slaying talents that she practices in secret, Sleeping Beauty puts her courage to the test in the dark of night, fighting evil as she searches for a way to break the spell that has cut her off from her family. In a special twist, readers have the opportunity to make key decisions for Sleeping Beauty and decide where she goes next—but no matter the choice; the result is a story unlike any fairy tale you've ever read!
Posted by Irena @ This Miss Loves to Read at 5/11/2011

Those are very interesting questions I+d ask the author myself and she gives great answers. Thanks to you both for sharing!

Great interview! These books look like fun. It is a hard choice, but I think I would like to win Cinderella Ninja Warrior. :)

Great interview, both books sound awesome! I had a hard time choosing, but I decided I'd really love to read the Sleeping Beauty Vampire Slayer! :)

Thanks for the giveaway Irena and Maureen! :)

Fabulous interview. I have been wanting to read Cinderella Ninja Warrior for a while as like you I am a huge fan of fairy tales and heir retellings. I also love how McGowan talked about reinventing the heroines to represent stronger female characters, although Cinderella was a pretty tough cookie. Thanks for the giveaway!

Thanks for having me, Irena! Good luck to everyone in the giveaway. :)

I'm so intrigued by how McGowan came up with her concepts-just testing her editor with the idea of ninjas and then moving on from the title of Sleeping Beauty: Vampire Slayer.

I already enjoyed the Cinderella one so I'd like to win Sleeping Beauty.

Thanks for much the interview and hosting the giveaway. We really enjoyed reading all your questions.

Nice interview :)
I do like that these heroines get a more kickass

I enjoyed the interview so I'm a new follower. Look forward to reading more. I would be interested in Cinderella Ninja Warrior for the giveaway. thanks!

i just heard about this series & i can't wait to read them!!!! thank you for the giveaway!! i would love to win both books, so either one would be GREAT!!!

She's a wonderful writer, i have some of her books and I like them very much, I'm about to buy a new one.
I really like the perspective she uses in the book, is something like a first person narration.