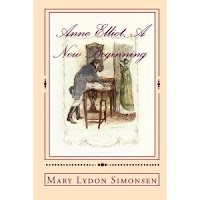 SUMMARY:
On Anne Elliot's 25th birthday, her family declared her to be a spinster, but instead of being downcast by this change in status, she finds it to be quite liberating. As a result of her new-found freedom, Anne becomes a long-distance runner, and this activity greatly increases her confidence. It is this new Anne who Captain Frederick Wentworth meets when he sees the love of his life after eight years of separation. The Captain admires the changes in Anne, and he finds that he is falling in love with her all over again. However, there is a complication. The heir to Kellynch, the Elliot estate, William Elliot, has also come back into the picture after an estrangement with Anne's father, Sir Walter Elliot, and he has set his sights on Anne. Now living in Bath, Anne senses that something is not right, and with the help of a street urchin named Swoosh, she sets out to discover what William Elliot is really like.

THIS MISS REVIEWS:
This is the third book by Mary Lydon Simonsen that I’ve read and I have to say, she never disappoints. I enjoyed reading this novel so much that I read it in one single day.

Anne Elliot is a new person and a strong, independent woman in this novel. On her 25th birthday, when she is declared to be a spinster, Anne decides to take life in her hands and free herself. I really wanted to hug Anne for her brave decision that brought such delightful changes to her character. I loved the original by Austen, Persuasion, but Anne’s resigned and quiet, sort of like a grey, quiet mouse, in the original. In Simonsen’s rewriting, she’s something else – strong, independent, with a sharp tongue and wit. I really loved how she was able to talk back to her family. In the original novel, she swallows their humiliating remarks, but not this Anne.

The main thing that strengthened Anne so much mentally, and also physically, is running. In this novel, Anne is a long-distance runner. This sounds anachronistic. But let me tell you, anachronisms really works so well in this novel. This story is meant to be a humorous take on Persuasion and a bit of a parody, and it has to be read as such. I found myself giggling several times.

There are many wonderful and funny allusions to modern times. Puns, fun and funny references to modern times, humour and irony are wonderful ingredients of this novel. I don’t know why, but for some reason my favourite reference was the “Avon Calling!” one. If you don’t know what I’m talking about, buy the novel, read it and you’ll know. Really, you won’t regret it if you like humour and Jane Austen.

The novel also has serious and emotional moments. The serious moments refer primarily to William Elliot, the nasty heir to Kellynch, who is a bad man, indeed, and also to Anne and Frederick becoming forced to endure another separation due to Napoleon’s escaping from Elba. There is also romance, mostly between Frederick and Anne. It was really memorable to read about a jealous Frederick. Anne is not the only person who undergoes a great change for the better. Her sister Mary, the hypochondriac extraordinaire, also finds a new purpose in life that affects her marriage to Charles in a good way. Louisa and Captain Benwick also have their fair share of romance, but things are not easy for the melancholy Benwick. I loved that the author concentrated on Benwick quite a bit, as well as on the family of Captain Harville. They’re only by-standers in the original, but in this novel they have a clear voice. Even Elizabeth and Sir Walter change for the better. Essentially, they remain as vain as ever, but they do change.

I really loved the novel. It is so cleverly written and has many funny, as well as some less funny moments that are really enjoyable to read. As a reader, I am not fond of sexual subtlety as far as Austen’s characters go because the main characters are proper ladies and gentlemen, so I had to get used to the fact that Anne and Frederick were so open with each other in private and even produced sexual innuendoes quite freely. This is part of the humour as well, but I guess it all depends on personal preferences. Still, I enjoyed the novel thoroughly and I wasn’t too bothered by the sexual innuendos. The novel as a whole is really well written, very clever and witty. As I’ve said, a perfect read for someone who loves humour and Jane Austen. The story, as well as the characters, are dealt with in a fresh, desirable way. This novel made me love Persuasion even more. It reminded me why Austen is such a great author. Simonsen really is an Austen connoisseur.

If you ever get a chance to read this book, do read it. It’s a wonderful novel.

Thank you so much for your wonderful review. I'm very glad that you enjoyed my story and that it made you giggle. That's high praise for me. And congratulations on your blog. It looks wonderful, and I have added it to my blog stream. Mary

I really enjoyed the novel. Writing the review was an additional bonus for me. Thanks, I'm glad you like my blog!