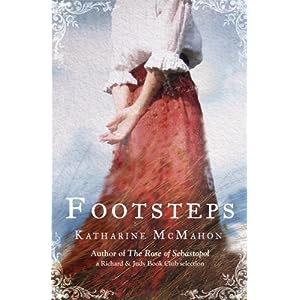 SUMMARY:
The women in Helena Mayrick's family have always led secretive and tragic lives, and when Helena's comfortable marriage is devastated by her husband's violent death, it seems that she, too, is locked into the cycle. Helena is invited to research a book on her grandfather, H. Donaldson, the celebrated Edwardian photographer. At first she is reluctant to immerse herself in family history, particularly as Donaldson's relationship with her grandmother, Ruth, is shrouded in mystery and turmoil. But gradually, as the story of enigmatic Ruth and the elusive, passionate Donaldson unfolds, Helena finds that the past, like the present, was shaped by cruel dilemmas and the demands of love...

THIS MISS REVIEWS:
I loved this novel from the first page to the end. It is a very moving and compelling read that juxtaposes the present and the not so distant past of Helena Mayrick’s families: her mother’s and her husband Michael’s. The two families are intertwined on more levels than one could imagine at first.

McMahon’s style is very engaging. It’s clear, lyrical at times, often simple, but very direct. Every word is important and carries a meaning. The story is beautiful, emotional and has the effect of really impressing the reader.

The story starts with Helena Mayrick. She has just become a young widow, as her husband Michael died in a tragic accident in the mountains. She is mourning his loss, has to struggle with her grieving daughter Nina and discovers something about her husband that makes her doubt his honesty and makes her feel angry. Her mourning is, therefore, not simple; it’s tainted. Things change when she is contacted by a young photographer Nicholas Broadbent. He is researching the life and photographs of Helena’s grandfather, the famous photographer Donaldson. At first, Helena doesn’t want to collaborate with Nicholas, but eventually gives in to the man’s request, as this gives her an opportunity to visit Westwich again, the home village of Michael’s parents. She can’t count on the help of her mother Joanna. Joanna is the illegitimate child of Ruth Styles and Donaldson, and she has bitter memories of her past. Joanna also believes that the women in her family are tragic creatures. She has a happy life, a good husband, a good marriage, a daughter and a granddaughter, so she doesn’t want to bring misery upon herself by digging up the past.

At the same time, we learn about Ruth Styles and Donaldson, the photographer. Ruth visited Westwich yearly for a family holiday. Her mother Julia was a native of Westwich and she owned The Rush House, where the Styles family stayed every summer. Julia is a fragile woman, affected by her mother’s suicide that happened when Julia was a child. Eventually, Julia refuses to leave Westwich again for a very peculiar reason connected to her troubled childhood, and Ruth sacrifices herself and stays with her mother, although she could have gone back to London and enjoyed the life of a young Edwardian lady. In Westwich, she meets Donaldson and their complicated love story begins.

The females of Ruth’s family are very complex and intriguing creatures. Julia Styles is mentally ill because of the past. Ruth tries to have control over her life and leads a fairly good life, but she is lonely, isolated from the world, lingering in Westwich that is being slowly eaten away by the powerful grey sea. These women are very burdened with the past, as well as with the present, and this hinders them very much. They can’t live normally. They avoid life, although Ruth thinks she leads a full life. Especially Ruth is so used to being burdened that when opportunities arise for her to free herself and really begin to live, she recoils and lets every opportunity pass her. That’s why her relationship with Donaldson is so complicated. He loves her purely and deeply, and she likes him back. She even grows to love him, and the truth is, he is the love of her life, but she doesn’t let him near her. She’s afraid of what opening up to him might bring. There is only one moment in the novel when Ruth lets go completely and allows Donaldson to embrace her with his love, but afterwards, she is cold towards him and acts as if they are strangers, which is in fact what Ruth forces them to become. But it’s amazing how Donaldson’s love for Ruth survives everything. His love for her is really, really touching.

I think McMahon dealt really well with the theme of the past burdening the women of one family and affecting their lives significantly. The female characters in the book are great. They are unable to really live, but as characters, they are great and I was really sucked into their tragic lives. The setting is perfect, too. Westwich, located by the sea, is a village that’s slowly being eaten away by the sea. It gets smaller and smaller, and this is not only true for many English villages located by the sea, but it’s also symbolic for the women of Ruth’s family. They allow the past to eat at them and make them fade away slowly, like Westwich. It’s an amazing allegory, I think.

Joanna, Helena’s mother, managed to break the tragic spell hovering over the women of her family, but she is still burdened by the past. Helena is the one who really breaks the spell by discovering the truth about Ruth and Donaldson, and how their love story ended. By the end of the novel, I began to suspect the truth, and I was actually right in my assumptions. Still, when the truth is revealed, I was shocked at first and then sad. Helena also re-discovers her relationship with Michael and finds the will for a fresh start. She re-discovers herself and, as I’ve said, breaks the spell.

The novel is a really wonderful piece of fiction, very poignant and emotional. It’s a family drama that I would recommend to everyone. It only has one flaw: the ending is a bit rushed and too abrupt. I don’t mind vague endings, but this one was a bit too vague. Still, this is a compelling novel, although it may not be perfect. If you get a chance to read it, do so.

Wow, great review! I can't wait to finally read this one - I have like four books by this author and haven't read any, eek!

Shame on you, haha! Kidding. The Alchemist's Daughter is really great, too.

Nice review! Thank you for sharing. I am going to check out this author on Goodreads!

Did you know you can create short links with AdFly and get $$$$$ from every click on your short links.