The Lady of the Sea by Rosalind Miles 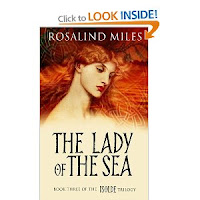 GENRE: historical/Arthurian fiction
SUMMARY:
Isolde, heir to the throne of the Queens, is now a sovereign in her own right. With the glories of the throne comes the responsibility of a queen, and Isolde knows she must return to her beloved Western Isle. She can no longer tolerate her marriage to King Mark of Cornwall, a marriage she has accepted for years in order to save her country from the threat of war, and to be near her love, Mark’s nephew, Tristan of Lyonesse. Her husband, Mark, always cowardly and spiteful, is too heavily influence by his monks and counsellors, who loathe the powerful and independent Isolde. And so she leaves Cornwall for good and comes home to Ireland, where her lords face a growing threat from the war-like Picti, who live in the barren highlands to the north of England. The Picti have a bold new king, Darath, who is determined to take the riches of Ireland for his own people, whether by war or by marriage to Isolde. Isolde gathers her armies to confront the Picti, and faces a violent conflict as well with King Mark, who vows he will not let a prize like Isolde, and Ireland, slip from his grasp. Isolde in last in a line of famous warrior queens who have guarded Ireland from time before memory, and now she and her knight, Tristan, must play out their fate and face her enemies in a final battle, a war that could spell ruin for them both.

THIS MISS REVIEWS:
This is the last book in the Tristan and Isolde trilogy, preceded by The Maid of the White Hands and Isolde: Queen of the Western Isle. I did not read the first two novels of the trilogy, but even so, the third novel was very easy to follow. I know the legend(s) about Tristan and Isolde and the author also explains and describes things well.

In general, I liked the book. I think the author handled the legend very well, highlighting the purity and depth of Tristan and Isolde’s love for each other, the customs and the significance of chivalry, as well as the pagan belief in the Mother-Goddess. The atmosphere of the novel was really magical and pleasant and I enjoyed reading the novel.

However, the novel was not as good as I’d expected it to be. Isolde’s character was quite alright, but Tristan seemed a bit bland to me. He is a knight, of course, and must follow certain customs, but knights have different personalities, too, whereas Tristan was really one-dimensional to me. He was just another knight and I expected more from him, especially considering that he and Isolde are the protagonists.

Isolde and Tristan and really dedicated to each other in this novel, which I liked, as this is true to the legends, and although they encounter problems and even doubt each other at one point, their love for each other is so strong that they chase away all doubts.

I thought that the invasion of the Picts would be really interesting to read about, but it was not. King Darath, the young leader of the Picts, was a really great character to me, very intriguing, but the matter with the Picts was resolved so fast that it was a bit unbelievable to me. King Darath came to Ireland to take its throne and make Isolde his queen, but the matter resolved so easily. I just did not buy the fact that a warrior king lusting for blood would give up so easily. I was a bit disappointed in this respect.

King Mark is a typical villain of medieval legends, but he provided some reading fun. He caused a lot of trouble for Tristan and Isolde.

So yes, in general, I liked the novel. It was interesting to read this take on the Tristan and Isolde legends. Other characters from the legends also appear or are mentioned, like Sir Gawain and Sir Galahad, King Arthur and Queen Guinevere, Sir Lancelot and Merlin. I love the Arthurian legends, so I liked to come upon these names. But yes the novel lacks a certain something, a bit more excitement, definitely (as the description on the back cover promises a war with the Picts), but all in all, it was an enjoyable read, nonetheless. It provides a good, magical read.

Sounds interesting - thanks for the recommendation! :)

i havent really read much historical fiction but this seems interesting, may add the series to my wishlist

O am not too familiar with this legend, but I really enjoyed (as always) reading your feelings about the book. Thanks for the insightful and honest review.

This one sounds to differ from the legend..I take that they do not die and it ends depressingly as always