The Secret of Lost Things by Sheridan Hay 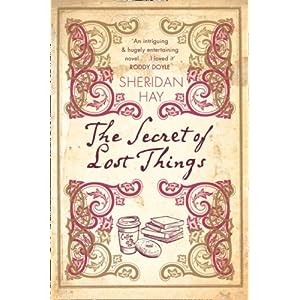 SUMMARY:
Eighteen-year-old Rosemary Savage has a scrapbook of cities and a passion for novels. When her beloved mother dies and the family hat business is sold, she decides to leave her home in Tasmania for the glittering spires of New York City and a fresh start of her own. Soon after her arrival, Rosemary stumbles across the Arcade, a sprawling, ramshackle bookshop housing teetering piles of rare and used books, and staffed by a bunch of eccentric individuals. She’s offered a job as a general helper, and is soon thoroughly immersed in the bookshop’s way of life. But when she becomes assistant to albino store manager Walter Geist, she unwittingly stumbles across a major literary cover-up – and realises that at this particular bookshop, words are money and deception is power.

THIS MISS REVIEWS:
At first, I was struggling with the beginning of this book. It seemed very slow-paced, a bit too slow-paced for my taste. But then, in the middle, the story picked up and I was really sucked into the plot, the characters, the events and the mysteries of the bookshop. So, I can honestly say that this was a great read and it seems that great stories can also start slowly.

The protagonist of the story is Rosemary, a teenage girl (she’s 18) from Tasmania. Her life suddenly changes when her mother dies and she is forced to sell her mom’s hat shop. Her mother’s close friend prompts Rosemary to make her scrapbook of cities a reality and so, Rosemary travels to New York City, without a job and an apartment, accompanied just by her love of books and her wish for an adventure and a new beginning. On her first day in New York, she finds the Arcade, a bookshop that sells rare and used books. Rosemary feels an immediate connection to the bookshop and knows that she must try to get a job there. She succeeds, although the owner, George Pike, is a gruff man and seems reluctant to give Rosemary the job she wants. Her job is to sort through huge piles of books and help the rest of the staff when necessary.

Rosemary meets her eccentric co-workers. They’re Team Idiosyncrasy; that’s how I labelled them in my head. I already mentioned Mr Pike, the gruff, particular bookshop owner. Actually, I think he’s the least peculiar member of the eccentric bunch. Pearl is a transsexual who works as the cashier. He, or rather she is very lovely, and is loving and motherly towards Rosemary. Oscar is a young man who is in control of the non-fiction section. He’s really smart and knows a lot of things and facts. He often shares his knowledge with Rosemary and she loves to listen to him, as she has feelings for him. He, however, probably has a phobia of love or emotions, or something along those lines. He’s scared of having a romantic connection, he’s emotionally unavailable and the one time that Rosemary makes a move, he clams up. Arthur Pick is in control of the art section and he is pretty fond of photography books showing pictures of naked men that he shares with Rosemary. Last but not least, here is Walter Geist, the store manager. He stands out even in the world of the Arcade. He is a lonely, solitary albino man. When it becomes evident that he’s losing his eyesight, Rosemary becomes his assistant. This is a great opportunity for Rosemary, as she will be able to handle rare books and even manuscripts.

The adventure begins when Walter Geist is asked by a loyal buyer and collector of rare items to find a lost manuscript by Herman Melville that was never published and is titled Isle of the Cross. Rosemary begins her research on Melville, his correspondence and finds some clues that could lead her to the location of the manuscript. This part of the novel is so well written, so convincingly handled, that I really believed that Melville once wrote a book called Isle of the Cross that never got published. Of course, the manuscript is a figment of the author’s imagination, but it’s really great. Hints are given as to what the lost story is about and I wish Melville had actually written this invented manuscript and published it because I would definitely read this book. Also, I learned a lot about Melville himself. I knew some basic things beforehand, but I haven’t read a Melville novel yet, not even Moby Dick, and now I am tempted to tackle Herman Melville’s works.

The plot thickens and things get complicated. I loved the atmosphere when Rosemary was doing her research and how the tension of expectations was building up beautifully. Rosemary really gets caught up in the world of this lost manuscript and of Walter Geist and his eccentricities. Something happens between them, but not in the romantic sense, I’d say. What happens is weird and pretty disturbing to me, but it’s actually fine, as works for the novel.

I recommend this novel. It’s a fun, lovely read featuring eccentric characters and a wonderful literary mystery. It’s a book for book lovers.

Great review! I've been wanting to read this book for a while ...

Hi, just wanted to let you know I awarded you here: http://scribblereviews.blogspot.com/2010/06/awards-ceremony-part-2.html

I don't know about this one. I have a hard time with slow-starters. Goodreads only has it rated at 3.06--that's pretty low overall.

This sounds ever so good, great review!