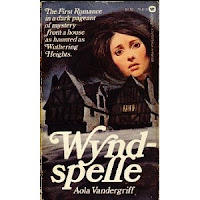 SUMMARY:
The year is 1720. Adria Anne Turner lives in the household of Reverend Potts in the Puritan community somewhere on the north-east coast of America. After being falsely accused of being a witch, Adria is forced to run and she finds shelter in the forbidden house, the house that is rumoured to be the dwelling of the Devil himself: Wyndspelle. The lord of the house, Sir Anthony Mordelle, allows Adria to stay in Wyndspelle, but she has to give him something in return: her freedom. Adria is pushed into the middle of danger and great uncertainty, and in Wyndspelle, one can never be certain who is a friend and who is a foe.

The setting is wonderful. The exact location of Wyndspelle is actually never revealed with exact words, but there are some hints and historical allusion that the location of the house is somewhere by the coast of the north-eastern area of America. The climate is windy, the sky mostly gray and rain is more common than the sun. Adria is a member of the Puritan community located below Wyndspelle. She is used to many stories circulating about the house. The dark mansion is known to be the dwelling of the Devil and his minions, and also of the famous Wyndspelle witch. Years ago, the Puritan community accused a woman of being a witch and they burned her at the stake on the beach belonging to Wyndspelle. According to the legend, the witch summoned a great wave that destroyed the flames licking her body, and the great wave washed away the witch, as well as her accusers into the deep, grey sea. This legend is very popular in the Puritan community and it haunts Adria throughout the novel, especially since she herself was accused of performing witchcraft. The author really created a wonderful gothic atmosphere and an air of repressing tension and suspense.

Wyndspelle itself is a character in the novel. It’s a magnificent, but grim mansion standing defiantly on a high cliff above the violent sea. The house was built over a crack above a cave that leads to the cellars of Wyndspelle. This natural phenomenon serves its purpose in creating suspense and eerie feelings. As the waves are lapping against the base of the cliff, the wind carries their s

Adria seeks shelter in Wyndspelle, only wanting to survive the attack of the Puritans. Sir Anthony Mordelle, the lord of the mansion, allows her to stay, put she pays a high price for safety. She becomes a prisoner of Wyndspelle and cannot escape the hous,e as Sir Anthony had his men block all available exits. Sir Anthony wants privacy and the fact that Adria found a way to the house upset him, so he destroyed all of her chances of escaping the house.

The house has several inhabitants. Sir Anthony Mordelle is a nobleman from England in (self-imposed) exile. He both wanted to leave England and also had to leave his home country for several reasons. He has a dark past and a scar on his face to prove it. He is also blind, but his supposed helplessness does not soothe Adria’s fears in his presence. She sees him as a cruel, heartless man, for what she knows he has done to others, and for what he has done to her. Her Puritan upbringing makes her imagine dreadful things about him and she often wonders if he’s not actually the Devil. Then, there is Mark Welles, a handsome young gentleman who wants to help Adria as much as he can. He has been Anthony’s closest friend for many years, but he seems to be much different from the dark Anthony. Amanda Murchison is the housekeeper. Mostly, she looks down her nose on Adria, especially when Adria shows she has a spine after all. Ms Murchison would like to control everything, but although Adria obeys everyone at the beginning, she finds some strength in herself to rebel at times. Dorrie is an insipid lady’s maid, convinced that Adria really is a witch, and she causes a lot of unnecessary trouble for Adria, and also for the rest of the household. Sir Anthony also has loyal servants and guards from a nearby Portuguese village.

Things change dramatically when Sir Anthony has guests: his step-mother, Lady Elisabeth Mordelle, and his brother’s widow from England, the beautiful Lady Jane, whom he loved dearly in the past. Adria learns from Mark that Anthony was not always so dark and cruel; Lady Jane was responsible for many of the changes and grudges in Anthony. The ladies keep humiliating Adria and their arrival makes her feel insignificant and redundant in the house. Soon, she begins to suspect that someone wants to kill her and her main suspect is Anthony. Now that his love Jane is back, Adria is sure he wants her out of the way.

However, things are not as transparent as they appear to be. Many mysterious things begin to happen, there is something strange taking place in the cellars, and two bodies are washed up on the beach belonging to Wyndspelle. Soon, Adria does not know anymore whom to trust and whom she should fear and avoid. She is in danger and the house keeps on breathing, deepening the darkness around her and pressing on her shoulders. Who can she ask for help? Anyone could be the enemy. When death and danger spread through the house, the Wyndspelle drama reaches its peak.

Oooohhhh, I am definately going to keep an eye out for this! Great Review!

I had not even heard of this before, but I do love those Gothic mystery/romance kind of books. Thanks for bringing it to my attention!

Finally someone who appreciates Aola Vandergriff and her Wyndspelle! I loved the story it really captured my imagination. The two following books though were too similar to the first one, so I didn't like them *that* much. But I still enjoyed reading them.