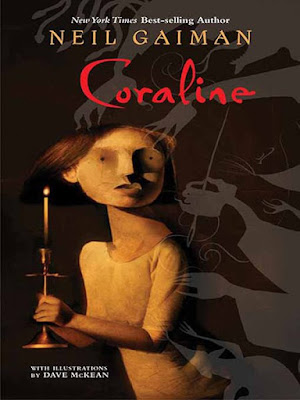 
SUMMARY:
When Coraline explores her new home, she steps through a door and into another house just like her own - except that things aren't quite as they seem. There's another mother and another father in this house and they want Coraline to stay with them and be their little girl. Coraline must use all of her wits and every ounce of courage in order to save herself and return home... but will she escape and will life ever be the same again?

THIS MISS REVIEWS:
This story is a modern and slightly dark fairy-tale for all ages. I can’t actually say whether it was primarily written for children, for adults or for everyone, but it can definitely offer something to every person who reads it. I am a huge fan of Gaiman, but it took me a long time to finally get my hands on Coraline, as the poor thing had been gathering dust on one of my bookshelves for years. I am happy to say that this novella did not disappoint me in the slightest. I absolutely loved it and I read it in one day.

Coraline is a very curious, intelligent and bored girl. Her parents love her, but they are always busy and all Coraline wants is some attention. She is bored in their new apartment in an old house, so she entertains herself by visiting her very peculiar neighbours – the Misses Spink and Forcible, former actresses with an apartment full of terriers, and Mr Bobo, who supposedly has a mice circus. But that is not enough for the curious and very perceptive Coraline. One day, however, she discovers a secret small door in the unused salon in their apartment and when she wanders through the darkness to the other side, she finds a world identical to her own – the same furniture, the same decorations, the same parents, but as much as everything is the same, it is also very different. Her other mother and her other father, two perfect creatures who shower Coraline with attention, have black buttons for eyes.

The new world is alluring, but to become a part of it demands a heavy price that Coraline is not willing to pay. Her rejection of other mother and other father, however, unleashes evil that is beyond a little girl and her real world that she thought was gray and boring compared to the other world is in grave danger, as are the people Coraline loves the most – her real parents.

This story has two great morals: “Be careful what you wish for” and “Face your fears”. This is explored in a subtle way, but it becomes very clear in the end that these were the two lessons Coraline had to learn in her quest to save her seemingly gray and boring real world and learn to appreciate it, which in the end she dos with all her heart. The novella has many elements of a fairy-tale, but I won’t discuss them, as I want to avoid spoilers. In its core, the story is dark and scary, but it is also very uplifting and makes you think a little.

In 2009, Coraline was turned into a wonderful animated movie that is, I think, a great tribute to the book. The story of the movies is extended, some things are added and changed, but it has the essence of the book. I recommend that you read the book and see the movie.

Lovely review Irena. I've never really been ispired to read Coraline...I just had this feeling that it was a bit surreal and dark. But I suppore that is waht most fairytales are like, aren't they? Now, I've thought about it. Take Little Red Riding Hood. A girl in a red cape gets stalked by a wolf... Hmmm... Yep dark and surreal. Great post.

I have not read this book or seen the movies, but after reading your review I think I would really enjoy it. I love that it sounds like it might have been written for adults as well as children. Great review thanks.

I have only seen the movie but it was good, and oh how scary button lady was!

the daughter (10) and I are re-reading this together for a good autumn scare. It is deliciously creepy.
though the daughter likes to watch the film over the book, but the book sets a better mood for me. either way, when we were at Target some months back we saw a doll with button eyes and both got the chills. (no, it wasn't Coraline merchandise, either.)

I quite liked the movie but never got around to looking at the book. This would probably be a good choice to read this October because it's pretty creepy.

I read this years ago, but only saw the movie recently. I liked both, but I think I prefer the book. I remember being quite creeped out by some of the scenes in the book; it was very memorable.

Loved the book, but have not seen the movie yet. I'm still creeped out by the eyes!