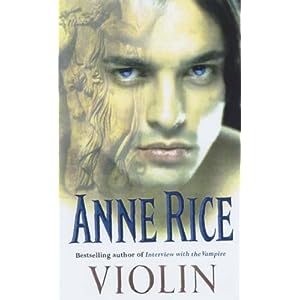 
SUMMARY:
Triana’s grief is deep and almost boundless. Death has marked her, and taken her husband. Now only the music in her dreams can carry her from night to night. And now, into those dreams, into those nights, comes Stefan, the restless, tormented ghost of a Russian aristocrat. Stefan’s musical genius will first enchant Triana, then dominate her so that she will be drawn into the cruel past in which he lives his earthly life. Finally Triana will find herself in the realm if ghosts and spectres where an ally awaits her.

THIS MISS REVIEWS:
I love Anne Rice’s Vampire Chronicles, so I wanted to read a book by her that has no connection to her vampires; I was curious.

How can I review a book I didn’t even understand? I’ll give it my best. This book clearly has no point and is a very self-indulgent piece of fiction. Apparently, this is a fictional autobiography of Anne Rice, which is quite scary to imagine because the protagonist, Triana Becker, is an individual obsessed with death and unable to move on for the larger portion of the novel.

This is an incredibly slow read. I actually read the novel pretty fast, but only because I wanted to finish it as soon as possible, not because it was such a gripping and riveting read. Triana Becker is a woman in her 50s, whose husband just died of AIDS. They married when he was already sick and they had this sort of strange, possibly business arrangement between them. It is never explained why exactly Triana married Karl, but as far as I understood it, she is a masochist, in my opinion, believing that she is guilty of so many bad things that have happened to her in life. Her guilt is entirely misplaced and now that her husband died (I don’t even know if they loved each other or just loved the whole masochistic thing going on between them), she is completely crushed, devastated and filled with morose and self-destructive thoughts to the brim. For the first hundred pages, there is nothing to read about but Triana’s dark thoughts about death, her dreams about her highly dysfunctional family lying in a grave and she resting with them in her head. I warn you, if you are suffering from depression, don’t read this book.

Things become more interesting when a mysterious violinist begins to play for Triana under her bedroom window and his music is soothing, as well as dangerous. Triana feels that it’s giving her ideas and is driving her insane (although, how more insane could a person become?). It is revealed that the virtuoso violinist is the ghost of a Russian aristocrat, Stefan Stefanovsky. I became intrigued, especially since it was his wish to drive Triana insane, making him a sort of incubus creature. His power lies in the violin that is a ghost as well and therefore a haunted object. I really liked the idea. However, it is never revealed why he chose Triana and what he wanted from her. It was not her sanity, but I don’t know what it was. I’ve been able to analyse complex books, but this one is beyond me. I just can’t read between the lines when you have nothing to work with, no clues, nothing. Stefan and Triana engage themselves in a sort of battle of wits and then, something unexpected happens. Triana, who is pretty much tone deaf, but is a great lover of music, in particular of Beethoven, manages to take the violin from Stefan’s hands, robbing him of his power somehow (Stefan is unable to claim back the violin) and turns into a virtuoso, his talent pouring into her.

Stefan gets really angry and takes her with him into the realm of ghosts. This part was really good to read. Stefan’s past is revealed, as well as how he died. He died for the violin that became a ghost together with him and over the years, he became so strong that humans could see him and touch him as if he, too, were still human. We meet Beethoven’s ghost, Triana’s “guardian angel”. I have no explanation for this. Triana is a random human being and I have no idea why all these ghosts are on her side and not on Stefan’s. The idea of Beethoven being someone’s ghostly ally, without any specific reason, is very far-fetched to me. Moreover, Beethoven was not in character, and neither seemed to be Paganini, who also appears in the novel.

After this part, the novel just tries to fill the last hundred pages, it seems. Triana becomes the new Susan Boyle, selling records and holding concerts, as she is now a famous virtuoso, playing magical songs on Stefan’s violin. In the end, she returns the violin to him, but I have no idea why. I just highly dislike books where things are only clear to the characters, but the reader has no clue about what just happened. Reading between the lines is fun, but you need to have some lines in the first place to support such reading.

All in all, this was a disappointment to me. I can’t believe this novel was written by the same person who wrote The Vampire Chronicles. It seems Rice just had to get this story out of her system, but it makes very little sense. Hardcore Rice fans and other people might enjoy this, but sadly, I couldn’t.

It is funny, but I was never a fan of Rice's vampire stories, and this sounds more like torture than an enjoyable read. Love your honesty.

Oh my-I was really interested to see that Rice had written something that wasn't about vampires (I really don't like vampires) but this sounds awful. I will steer clear of it.

Thanks for that honest review, and I will just..yeah not read this one. Better try some other Rice books first

This sounds pretty terrible. Love the honesty and the analysis of this post. I haven't read any Anne Rice - I think she is too much on the horror side of things for my taste.

Funnily enough, I actually want to read this now. =P I know that Interview with the Vampire is meant to be autobiographical in a very emotional sense (Rice is Louis; her husband is Lestat; their dead daughter is Claudia), and I'd like to see another reimagining of her life using different metaphors.

So I do see what you mean about this book seeming very indulgent, and something she might have wanted to get off her chest rather than a story worth telling. I guess if I keep my expectations to that rather than expecting a real page turner, I won't be so disappointed. =P

Thanks for the review, Irena!

PS--My captcha is "nomoting"! It sounds like the answer to the riddle, "What is the opposite of emoting?" LOL! Kind of appropriate for this post, aye? ;-)

Great review. It sounds like it could have been really cool, but oh well.

Although I'm not a "hard core Rice fan", I have to say this book flowed together beautifully for me, and has inspired me to seek out more of her novels. I didn't interpret Beethoven's ghost as being Triana's personal ally or guardian angel. Her eccentricity and deep love of his music was intense; however her contact to his "spirit" occurred through Stefan.
In my opinion, she returns the violin to Stefan because they both knew he needed the strength to finally cross over, and since the violin was part of his ghostly being, she returned it to him... it was also evident that as much as she was tortured by his presence, she also deeply loved him. Their similarities certainly outweighed their differences. Their internal guilt, want for fame, obsessiveness... etc. This was a book I absolutely could not put down. By the end of the book, I felt as though I knew each character through and through. I wouldn't have changed a word.

I guess Anne Rice can't write a stunner every time....I have read most of her books (apart from those written when she re-discovered her religion) and utterly adored them especially the Vampire Chronicles but I am fast becoming disillusioned...Violin is utterly boring if not self-indulgent waffle. I read it through half out of loyalty to the author and partly waiting for something wonderful/surprising/exciting to happen....sadly never did!