The Alarming History of European Royalty by Karl Shaw 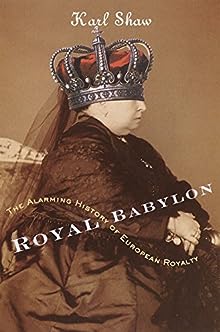 BRIEF COMMENTARY:
Today, November 4, is the National Non-Fiction Day and in celebration of this day, I decided to review one of my favourite non-fiction books. I wanted to precede my review with a brief commentary about non-fiction that I like to read. I don’t read non-fiction books often, or at least not as much as I would like to. I really do like non-fiction, though, be it magazines, newspapers or non-fiction books. I read a lot of non-fiction online. I read daily news online, I regularly check CliqueClackTV for their reviews of TV shows and other matters relating to pop culture (I love this website) and if reviews count for non-fiction, then yes, I read a lot of reviews every day, written by my dear fellow book bloggers! We all do that, don’t we?

As for non-fiction in physical form, I am addicted to the National Geographic magazine and since it’s a monthly, I check their website regularly, be it for short daily news and articles, or for the beautiful photos. I love non-fiction books about history, famous (or not so famous) rulers, period fashion, life in the past and biographies about authors. Occasionally, I will tackle a science book, and I mean science for science dummies like myself. As far as science non-fiction goes, I am limited to things connected to that humongous thing called the universe. Anything to do with the universe, really. My favourite universe topic: supernovas and black holes. This can actually lead to very philosophical debates about dimensions, relativity of time and so on. Although I’m a science dummie, I do love to read and talk about the universe and I’ve actually learned a lot about it, and I quite understand these things now, which makes this science dummie very proud of herself, indeed.

This is the end of my (perhaps not so) brief commentary on the non-fiction I read. Now, let’s proceed with the review.

SUMMARY:
Since 1714, Britain has been ruled by a clan of inbred Germans with a history of mental instability and a talent for profligacy and private debauchery. But compared to their blue-blood cousins across the Channel, they are neither remarkable nor particularly mad. In the last three hundred years, Europe has been plagued by dysfunctional rulers - the insane kings of Spain, the psychopathic kings of Prussia, the sex-fixated French kings, the famously inbred Habsburgs of Austria, and of course, the drunken, debauched and always dangerous czars of Russia. This unusual and amusing account of the great and the sordid will make even the ardent royalist wonder whether Europe's republics really miss this collection of madmen, philanderers, sexual misfits, sociopaths and tragic emotional cripples.

THIS MISS REVIEWS:
Have you ever wanted to be a king or queen? Word of advice: Don’t. At least, you probably won’t wish to be a monarch after reading this book.

This book exposes the sordid past of the European monarchy, focusing not on the glitz and the glamour, but on the debauchery, psychopathy, insanity and whatnot of famous European monarchs. You think you know the famous monarchs like Queen Mary of England for having a firm ruling hand (by having many protestants killed), Queen Catherine I of Russia for being a strong woman, a good strategist and on friendly terms with great philosophers, which earned her the soubriquet Catherine the Great, or perhaps Frederick I of Prussia for being a great militarist. Well, you may want to think again.

Queen Mary was a kleptomaniac, Queen Catherine was an alcoholic who was often so “tipsy” that she didn’t even know someone tried to assassinate her, and Frederick I collected tall men for his Potsdam Giant Guards. Frederick the Great of Germany "drank up to forty cups of coffee a day for several weeks in an experiment to see if it was possible to exist without sleep." (I, personally, am surprised that his heart survived the experiment.) The Spanish Queen Juana La Loca (The Mad) kept the embalmed body of her husband by her side. My personal favourite: King Ludwig II of Bavaria, who bankrupted his country by building fairy-tale castles (which are now, ironically, big tourist attractions and bring in a lot of money). It’s quite funny to imagine that Walt Disney might be without a great logo had it not been for crazy Ludwig.

I only mentioned very few of the historical rulers’ many shenanigans. There are so many more described in this book, in an engaging, quite humorous style laced with sarcasm that pulls the reader in and makes it almost impossible to not finish the book in one sitting. This book is a truly broad account of the lives of the European monarchy, entirely exposing the skeletons in their royal closets, so to say. Inbreeding was a huge problem, which might explain the past craziness keeping the European monarchs in its clutches. For the sake of keeping the crown, uncles married their nieces and mothers their sons. One can hardly expect normal progeny.

This is a wonderful and quite shocking read, in the best sense of the word. The only complaint I have is that there are so many rulers included that the reader might get a bit lost at times, as I did, trying to remember which one was which.

But all in all, this is a highly enjoyable read and if you’re interested in history, rulers in particular, and would like a different take on them, then I definitely recommend you read this book.

can't wait to get my hands on this :):)
I love National Geographic as well...the photographs are absolutely astounding!!

The universe fascinates me too, although it is quite mind boggling.

This book sounds fantastic. You can't make this stuff up right? I'm putting it on my TBR list.

Wow! This sounds like a great book. I have to get a hold on it.

This is my kind of non-fiction :) Would love to read it. Awesome review

One of the things that has stuck in my head is that James I of England's tongue was too big for his mouth! Yuck! Very interesting review.

P.S. Mary of Teck, George V's wife, was famous for admiring other people's possessions. "Hint, hint, I'd like to take it home with me." People hid things from her because of that.

What a fun book with some amazing facts. I do not read a lot of nonfiction, but I think I would enjoy this book. Great review!

Did you consider trading with the ultimate Bitcoin exchange company - YoBit.