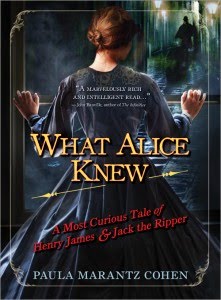 SUMMARY:
Henry James is suffering through boring drunken dinner parties in London, but when his brother William – renowned for his groundbreaking work in the new science of psychology – is summoned from America by Scotland Yard to help investigate an East End serial killer who calls himself Jack the Ripper, things are suddenly much more interesting. Their bedridden sister Alice James takes on the role of lead detective, as the three precocious siblings attempt to unravel the true identity of the killer. Searching London high and low, encountering characters both suspicious and ridiculous, they inch closer to a killer neither they, nor readers, would suspect.

THIS MISS REVIEWS:
Jack the Ripper, the notorious serial killer who murdered (at least) five women in the Whitechapel district in London, has been a mystery ever since 1888, when he committed his brutal crimes. Over the years, there have been a number of suspects, but not one of them has been confirmed as Jack the Ripper. In this novel, the author takes a new approach to the mystery of the serial killer, choosing as the investigators of the crimes the James family – Henry James, American author, William James, his brother and famous psychologist, and their bedridden sister Alice.

What Alice Knew is a very gripping tale, offering both suspense as well as intellectual merit in the style of Henry and William James, as both brothers were greatly interested in human psychology. The story begins with a desperate invitation by Scotland Yard to William James, asking him to help them with his new approach – in modern terms, William is asked to create a profile of Jack the Ripper (Criminal Minds style), so that the police will be able to know where to search for the killer and find him before he slaughters more women. Meanwhile, Henry and Alice James live in London. Alice spends her days in her bed, suffering from the nerves, but still exercising her clever mind regularly. Henry spends his days trying to write and his evenings with his literary friends, drinking and debating on various issues.

I do not know much about the personal lives of the James siblings, but I enjoyed their characterization very much. I loved how attention was paid to character development and to their psyches, which is faithful to the spirit of the novels by Henry James. The James siblings are introduced really well and incorporated into the Ripper case in a believable and entertaining way. The reader also gets to read about other writers, as Henry James spends a lot of his time with various artists; for example Oscar Wilde, whose characterization is spot on in this novel, and the painter John Singer Sargent, who proves to play an important role in the novel due to his knowledge about the suspect.

There are a lot of details about the Ripper case included, some very interesting, some a bit gruesome, but although some descriptions are rather graphic, they do add to the novel in a good way. After all, the murders that Jack the Ripper committed were cruel and brutal and for the sake of the poor women who died by his hand, I don’t think it would be fair to ‘sweeten up’ the murders. I really enjoyed the profiling of the Ripper. The James siblings created the profile as best as they could, considering the limited means of investigation in Victorian England. William’s knowledge about psychology and his new ideas really shined through. Henry helped with his knowledge about London and its people and Alice was the one who put the pieces together.

Once the investigation involving the James siblings begins, the tension begins to build up nicely. Whitechapel is presented well, with all the dark alleys, poverty and despair of the poor. The reader has a chance to meet some very interesting characters, be it historical or fictional. Once the suspect is revealed, the tension is thick because in order to confirm the suspect as Jack the Ripper, the James siblings had to spend time with him and that was quite scary, in a thrilling sort of way. The ending, however, is quite surprising. The Ripper is discovered, but a shadow of doubt remains. In this respect, the novel is true to reality, which I liked: we still cannot be sure who the Ripper really was. In the novel, the reader has two options and it is up to them to decide which one is right. I can tell you that the man who is the suspect in the novel was one of the suspects in reality.

The language was smooth, very Victorian; sometimes a bit academic, in the spirit of the James brothers. At times, I found Alice a bit annoying, as she was so self-assured at times. But at the same time, I admired her because, despite being an invalid, more or less, she used her brain a lot.

All in all, this is a great Victorian thriller. It will definitely appeal to those who are interested in the mysterious case of Jack the Ripper, but also to those who simply like a bit of history, mystery and suspense.

This one is on my wish list already! Great review, Irena...

I've been wanting to read this and I'm glad to hear that it's so good. I love the idea of profiling a criminal in Victorian times without all the technology and psychology we know now.

I am not a big fan of thrillers..ok make that not a fan at all ;) But I did enjoy this book, perhaps cos of the historical setting and the Ripper enigma

Great review! I agree with you on not "sweetening up" the murders. I think thrillers are a genre which is best if it sticks close to reality. What is more thrilling than reality after all?

I enjoyed this one as well. The ending was something else.