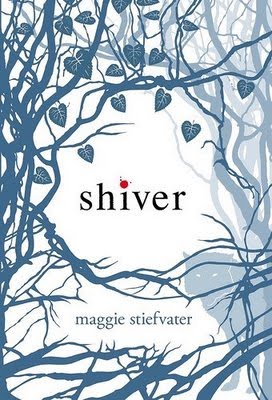 SUMMARY:
the cold.
Grace has spent years watching the wolves in the woods behind her house. One yellow-eyed wolf—her wolf—watches back. He feels deeply familiar to her, but she doesn't know why.

the heat.
Sam has lived two lives. As a wolf, he keeps the silent company of the girl he loves. And then, for a short time each year, he is human, never daring to talk to Grace...until now.

the shiver.
For Grace and Sam, love has always been kept at a distance. But once it's spoken, it cannot be denied. Sam must fight to stay human—and Grace must fight to keep him—even if it means taking on the scars of the past, the fragility of the present, and the impossibility of the future.

THIS MISS REVIEWS:
Shiver is the first book in The Wolves of Mercy Falls trilogy. It is a gripping tale that puts wolves in its centre. At first, I was not so sure I was going to like the novel, as it’s been compared to Twilight by Stephenie Meyer, but I was very pleasantly surprised.

When she was ten, Grace was attacked by wolves and survived because one of the wolves saved her. Ever since that day, Grace has been fascinated by wolves, in particular by the yellow-eyed wolf that saved her life. One day, that wolf is badly hurt and turns into a human boy, Sam. That day is the beginning of Grace and Sam’s love story, but also of their struggle and danger.

This time, I felt and believed the instant love connection between Grace and Sam. They have been connected ever since the day he saved her life and Grace’s fascination with wolves is not strange, but has an actual basis. While Grace and Sam did spend a lot of time talking about their love, which is something I don’t particularly enjoy in paranormal romances, they also experienced normal couple moments. I must say that they really endeared themselves to me, as a couple and as characters.

Grace is a very independent teenage girl. Her life is more or less normal, apart from the fact that she rarely sees her always busy and slightly childish parents, a fact that she acknowledges and resents (what I consider to be a normal reaction in her case). She loves her friends, is a good student and a good daughter. Most of all, she loves wolves – specially her wolf, Sam. Sam is half human, half wolf. He is struggling with his animalistic side because he wants to stay with Grace and he can’t be with her as a wolf. He is a shy and introverted boy, a consequence of his tough childhood. He loves to read, especially poetry, something that I really enjoyed about him. Together, they make a great couple and there is one of the few paranormal romances that I find myself really caring about.

I enjoyed the wolf mythology. The word werewolf is mentioned, but I don’t think that the supernaturals in this novel are meant to be werewolves; they are people who turn into wolves during winter and remain human during the summer. I really liked this new aspect that one’s nature is connected to seasons, to temperature. There comes a time, after several years, when a human turns into a wolf for the last time, meaning they remain in their wolf form until the end of their days. Because Sam had a tough time when he first became a wolf, this time is coming for him much sooner than normal and he and Grace would do anything to have him remain human, but that is not as easy as it sounds. This is the main struggle in the novel and while there is not a lot of action present at all, all the tension is psychological, another thing that I personally like as a reader.

I liked the fact that Grace’s friends were involved in the story. At first, they were discarded when Grace began to dedicate all of her time to Sam, but that was rectified when one of Grace’s friends got quite an important role in the novel, becoming involved with wolves herself. Some questions remained unanswered, but hopefully that will be done in the sequel.

I must also mention that the narrative is very lyrical and beautiful. It alternates between Grace’s and Sam’s points of view. I’m really glad I could read Sam’s perspective as well.

The novel ended in a great, emotional way that definitely makes me want to read the sequel, Linger. I recommend this novel to lovers of paranormal romances and urban fantasy.

I totally agree with you about the instant love connection; he's "her" wolf, not someone she just meets off the street. Beautiful review!

I liked the fact that her friend are involved, too. I don't believe the usual hush hush top secrecy possible, at least the family or close friends would be bound to notice strange things happening to their loved ones.
Great review! Must out it on my TBR:)

While I did enjoy this book I was not as fond of it as other paranormal romances. I did however love the unique wold mythology that Stiefvater created. I also very much like Grace as a character. Great review.

I just wanted to pop by and say that I'm your new follower and that I liked your review. I'll have to check this book out. You can find me at my blog: http://caroleraesramblings.blogspot.com/ I'm looking forward to reading more of your reviews.

I really loved this book. I loved the writing as well as the story. I found it very lyrical.

I also loved the representation of the wolves. I'm glad you were pleasantly surprised. :-)