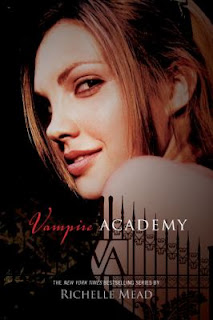 SUMMARY:
St. Vladimir's Academy isn't just any boarding school—it's a hidden place where vampires are educated in the ways of magic and half-human teens train to protect them. Rose Hathaway is a Dhampir, a bodyguard for her best friend Lissa, a Moroi Vampire Princess. They've been on the run, but now they're being dragged back to St. Vladimir's—the very place where they're most in danger... Rose and Lissa become enmeshed in forbidden romance, the Academy's ruthless social scene, and unspeakable nighttime rituals. But they must be careful lest the Strigoi—the world's fiercest and most dangerous vampires—make Lissa one of them forever.

THIS MISS REVIEWS:
Vampire Academy is the first novel in the Vampire Academy book series. It offers a new perception of the vampire world, dealing with supernatural characters mostly. The only true humans that appear in the novel are those who give their blood to vampires and the absence of human characters is definitely something fresh in the genre of vampire fiction.

The protagonist of the novel is Rose Hathaway, a Dhampir girl (half human, half vampire) who is training to become a bodyguard of the Moroi, a vampire race. She is a vivacious, brave, tough and rebellious girl who is prone to being reckless, but her heart is in the right place. Her best friend, Vasilisa ‘Lissa’ Dragomir, is a Moroi Princess who is having a very hard time at St. Vladimir’s Academy for vampires and dhampirs. Rose is destined to be her bodyguard. There is a strong bond between the two girls that is extremely rare. It also means that Lissa has powers that might put her in danger if the wrong vampires learn about her special abilities. This is exactly what happens and Rose must do everything in her power to save her friend before it’s too late because there is always the threat of Lissa becoming a Strigoi.

To explain about the Moroi and the Strigoi – I have never read a vampire book mentioning the two kinds of vampires and I am really glad and pleasantly surprised that Mead dug so deep into the Slavic vampire folklore. In the novel, the Moroi are mortal vampires and they are born. They need blood to survive and have to avoid the sun, but they are benevolent; they do not kill people and they have magical powers, as they can control the elements. I see them as very classy, elegant vampires and many of them are noblemen and noblewomen. Many of them have connections to Eastern Europe, which adds a nice, Slavic touch to the novel. The Strigoi, on the other hand, are created – if a Strigoi bites a human or if a Moroi kills a human while feeding, they become Strigoi. The Strigoi are evil, immortal vampires who prey on the Moroi, trying to eliminate them. The Moroi are strong, but not as strong and fast as the Strigoi, therefore the Moroi must employ bodyguards – Dhampirs – to protect them. This is so because the Moroi have given up on fighting long ago; they truly are a benevolent vampire race, focusing on doing good. I am very happy dhampirs are in the book. I am intrigued by the notion of dhampirs – half humans, half vampires - and Mead creates a very nice background for this race.

I truly enjoyed the folklore in the novel. It is something delightfully fresh and Slavic in the world of vampire fiction and while it took some getting used to the fact that the Moroi appeared to be almost human (since they do not engage in fighting and since, after training, Dhampirs are actually stronger than them), I truly enjoyed Mead’s take on the vampire world. The Strigoi only make a brief appearance in the first installment, but the short appearance proves that the Strigoi will be fun to read about. They are vampires as we know them – lethal, powerful, immortal and can be killed by getting staked or beheaded. They cannot go out into the sun and the best part is that all vampires, both the Moroi and the Strigoi, have fangs that they use on a regular basis.

The plot is not too complicated, but it is definitely enjoyable and intriguing, and there were moments when I was surprised. The characters are delightful, very individualistic and enjoyable to read about. Rose is a breath of fresh air amongst the heroines of paranormal fiction. She a fighter and also has a soft side, but foremost she is independent and knows her mind. Lissa is struggling with her powers and with many anxieties. She is very royal, but after all, she is only a teen and that shows. The men in the novel are delightful; female readers will know how to appreciate them – the bodyguard Dimitri Belkov, the Moroi Christian (my personal favourite so far) with his own demons and others.

I liked that the novel has a moral code. While fangs and sexuality are not avoided, they have rules. It is quite popular to have vampires bite their partners during sex, for example, but in this novel this is a great offence. In this teenage world, there are rules to be broken, but there are rules that have to be respected, or one’s respect is lost. I liked that concept. While perhaps there was too much teenage drama going on for my taste instead of vampire action, the novel set a great matrix for the continuation of this book series and I cannot wait to get my hands on the second novel in the series, Frostbite.

To conclude, I truly enjoyed this novel and it is a great new series I discovered. It digs deep into vampire folklore, going to its famous roots (Slavic culture). It has drama, action, intrigue and romance and if you are a fan of the paranormal or want an introduction into paranormal fiction, Vampire Academy is your book.

I have read so many reviews on various books in this series, but this is the first one I have read that reviewed the first book. I love that you discussed the two different types of vampires Mead portrays, and now I think I really may have to read a least this one. Fabulous review!

Great review! I had no idea this series has such a strong Slavic note you mention. I guess I have to add it to my TBR.

I didn't realize that this book dug so deep into the folklore; I thought it was shallower based on what I consider to be a cheesy cover. I had no idea about the two types of vampires so that was really interesting to learn.

I liked Christian too :D He is my fave. The whole Rose drama *yawn* ;)

Glad you enjoyed this one! The books get better too. I have been waiting for Last Sacrifice from the library for over two months....