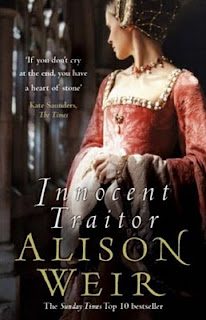 
SUMMARY:
Lady Jane Grey was born into times of extreme danger. Child of a scheming father and a ruthless mother, for whom she was merely a pawn in a dynastic power game with the highest stakes, she lived a live in thrall to political machinations and lethal religious fervour. Jane's astonishing and essentially tragic story was played out during one of the most momentous periods of English history. As a great-niece of Henry VIII, and the cousin of Edward VI, Mary I and Elizabeth I, she grew up realize that she could never throw off the chains of her destiny. Her honesty, intelligence and strength of character carry the reader through all the vicious twists of Tudor power politics, to her nine-day reign and its unbearably poignant conclusion.

THIS MISS REVIEWS:
Innocent Traitor is a brilliant and detailed account of the life of Lady Jane Grey, Henry VIII’s great niece, who was an innocent pawn in traitors’ hands and lost her life far too young, paying tragically for the sins of others.

The novel explores Jane’s life from the day of her birth to the day of her execution. Jane Eyre was born into a life of privilege, but she was an unhappy child, as she was not born a boy, but a girl. Her mother, the daughter of Henry VIII’s sister Mary, was a very stern parent and Jane’s father always remembered that Jane failed to be a boy. But Jane had the best tutors and turned into a highly intelligent and learned noble lady, known across Europe as a scholar. She was happy with her books and Latin texts, and she was able to think independently. She became very important when her parents and other noblemen saw a great opportunity to make Jane queen. That involved a lot of treachery and defying Henry VIII’s testament. The intelligent Jane, who never sought glory, saw how wrong that was, but after a great amount of scheming on the part of those around her, Jane became a queen with the shortest period of reign in history, as she was on the throne for only two weeks.

It shows that Weir is a historian, because the novel is very detailed and is an accurate account of Lady Jane Grey’s interesting and tragic story. This should delight any history enthusiast. The historical characters are very well explored and given a clear voice. The novel is written from several points of views, which really gives the story a fully perspective and I must compliment the author on capturing those real-life characters’ personalities so well. The reader gets to read about Henry VIII, Katharine Parr (his last wife who survived him), Edward VI (Henry’s son), Princess Elizabeth (who became Queen Elizabeth I), Princess Mary (the queen who became known as Bloody Mary) and other well-known historical characters. At the centre of the story is Jane Grey, the innocent traitor of the story. If you do not know Lady Jane’s story and if you are not all that familiar with the Tudors, you will definitely learn a lot from this novel. The customs of the period are observed and period language is used, although in a slightly simplified form to have the novel flow more smoothly.

The novel is also an emotional read. It is easy to love the Lady Jane and her tragic end really touched my heart. It seems unjust that she was executed, especially when understanding all the reasons for her untimely death. She is a forgotten heroine, but this book really makes her stand out and the Lady Jane deserves the attention.

This novel really is a must-read for all Tudor enthusiasts and just for lovers of historical fiction in general.

Read for the Historical Challenge 2011.

Great review! This seems a real valuable historical piece, I will definitely have to read this.

I think I prefer negative interpretations of Jane Grey (as a schemer who stole the throne from Mary) rather than as innocent. It is sad that she died so young though and it's always good to have multiple interpretations of a historical figure, especially when her environment is brought to life so well.

I only know it was a truly short reign, poor woman

Great review Irena! I loved this book when I read it! Before reading it, I never even knew that Jane Grey existed, let alone that she was also Queen of England (even if only for two weeks). The book really does show that Alison Weir is a historian. She has packed quite a lot of information in that book about everyone. I found her to be a truly excellent writer. In other cases, so much information might have put people off reading the book, but she manages to write so well that you don't feel as if you're being overloaded with information.

It's been nearly a year since I read this book and I am ashamed to say that I haven't been on the lookout for other books by her. I will be now that you reminded me!

The Tudor's history is such an interesting time in history, and this sounds like a wonderful account of a life that was from the very start was doomed. Great review!