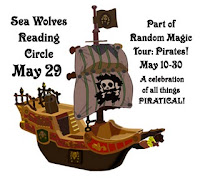 The Reading Circle is part of the Random Magic tour that focuses on pirate fiction. I have some romantic goodies to share with you, namely a list of novels of the genre that combines historical romance and pirates, so keep on reading, mateys! 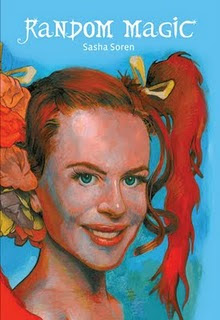 When absent-minded Professor Random misplaces the main character from Alice in Wonderland, young Henry Witherspoon must book-jump to fetch Alice before chaos theory kicks in and the world vanishes. Along the way he meets Winnie Flapjack, a wit-cracking doodle witch with nothing to her name but a magic feather and a plan. Such as it is. Henry and Winnie brave the Dark Queen, whatwolves, pirates, Struths, and fluttersmoths, Priscilla and Charybdis, obnoxiously cheerful vampires, Baron Samedi, a nine-dimensional cat, and one perpetually inebriated Muse to rescue Alice and save the world by tea time.

I would like to share a list of books dealing with pirates. Although one would assume I would recommend classic pirate novels like Treasure Island by R.L. Stevenson, this is not the case. I would like to introduce you to some pirate romance. I used to be a fan of historical romances featuring pirates, and I found some (more or less) recent, as well as new releases that might delight a lover of pirates and romance. Enjoy while browsing through the list of pirate-themed novels.

Do you find anything to your liking - that you'd like to read?

1704 - Dangerous times, when the colonies of the Americas are threatened by Queen Anne's War. It is not the French but a pirate who captures Mercy Penhall, mute Puritan spinster. In fear for her life and virtue yet drawn to the captain in spite of herself, Mercy has unknowingly begun on a course of adventure, heartbreak that will test her courage to the utmost. And in the end the secret she carries in her soul threatens to prevent even the small chance of happiness inherent in an impossible love. Edmund Gramercy is an unwilling pirate, forced to join a hostile crew to save his life. He defies them to spare the lives of the vanquished and the virtue of the women. But the mute Puritan girl tempts him like no other. It is best to set her free and never see her again. A pirate's life is a short one - for her own sake he cannot claim her. Yet their paths cross again, then again. He is drawn to her but his passion is hopeless. He is a wanted man. To love a decent woman is impossible. And there is a strange shadow behind her brave blue eyes... Can the impossible become possible for the pirate and the Puritan? (AMAZON)

(to be released) A vacation in the Bahamas goes awry, and a woman from 2009 unexpectedly finds herself in 1718 - amidst pirates. Sabrina is so consumed with her present-day problems that the last thing she expects is to suddenly end up face to face with real pirates. The notorious bad boys of the Golden Age of Piracy, Edward England, Howel Davis, and "Black Bart" Roberts, become Sabrina's means of survival in the past, and ultimately, her key to returning to the future.The catch? Sabrina happens to be carrying a book about pirates when she is swept into the past, and that book contains biographies of the very men she meets. She forms relationships with them and learns that, contrary to what she previously thought, they are sailors, servants, and slaves who were pressed into service, victims of social and historical circumstances of the era. When Sabrina finds herself falling in love with Howel Davis, a sailor who becomes a pirate out of desperation, she begins to wonder: Can she use her knowledge to change the past? (AMAZON) Once caught, it’s harder still to let a pirate go. When Annalisa Townsend’s ship is set upon by pirates in search of her father’s treasure, one of the crew, James Sterling, discovers her in the hold. When he moves to take her necklace, she begs him not to, as it is all she has left of her mother. He accepts a kiss in exchange for the necklace. “A fair trade, m’lady,” he tells her afterward, before disappearing.
A year later, with a forged letter of marque, Annalisa is intent on hunting down the wretched James Sterling and reclaiming her father’s treasure from him. But now she’s in danger of him stealing something far more vulnerable this time: her heart. (AMAZON)

Wild as a pagan goddess, Lady Summer galloped her stallion along the Cornish coast. She had dabbled in the smuggler's game to save her family estate, but a wealthy marriage would better serve her purpose now. Lord Ruark Helford seemed the answer to her reckless prayers. But as his hot, hungry kisses drew her toward deception and irresistible acts of love, she had to hesitate. Would this arrogant, handsome lord be her ticket to heaven--or hell? (AMAZON) 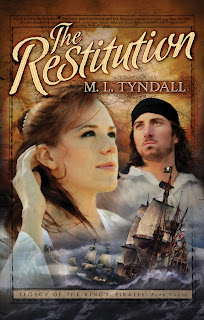 Lady Isabel Ashton, scorned by society after the birth of her illegitimate child, longs to regain wealth and position-despite Christ's call on her heart. But when her son is kidnapped, she's forced to seek the aid of the man who pirated her purity. How far will Isabel go to save her child and redeem her honor? Captain Kent Carlton, desperate to win the heart of the woman he once ravished, finds himself battling jealousy as well as the sea. Can a penniless pirate capture the love he so urgently desires, or will the lady seek her safe harbor in another man's arms? (AMAZON)

Ports to visit for the Reading Circle:

The Fluidity of Time

What Book Is That?

My Love Affair With Books

My library list just got longer. I have a hold placed on To Catch A Pirate. :)

These all seem amazing books, just my cup of tea:)

Great list-do you especially recommend any of these, Irena?

Great books! I love the premise for The Pirate and the Puritan.
Thanks!

The covers are pretty!:) I haven't read too many pirates books, just a couple i guess..should start out with these on my TBR list!

@Bookworm: The funny thing is, this is my wishlist, so I can't make any recommendations.:) The books have been recommended to me! However, The Pirate and the Puritan, and The Reistitution, are supposed to be really good reads, according to a friend.