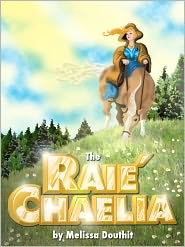 Melissa Douthit, author of The Raie'Chaelia, which I reviewed HERE, wrote a post about the books she read as a child and the authors she admired. Thank you, Melissa, for sharing it with us!

When I was young, and before I was introduced to Robert Jordan’s novels, I read a lot of Jack London and John Steinbeck. In fact, I loved the Call of the Wild so much that I named a puppy of mine Buck. We had assigned reading by these authors in school - Of Mice and Men, The Grapes of Wrath, The Call of Wild and more but I think once I was introduced to the authors, I read almost every book they wrote.

My love affair with these two authors hasn’t ceased. When I was working at the Lawrence Livermore National Lab back in 2004-2008, I took BART trip to Oakland where I visited Jack London Square. You see, there is a bar there that I wanted to visit. It is an old bar that has been around for over a hundred years. It is called Heinhold’s First and Last Chance Saloon and IMHO, it is the most important establishment at the square. Why? Because it is a bar that Jack London visited when he was kid and it is where he first began to conceive his ideas that went into his books. The bar, tables, and chairs are still made of the original wood. Even the clock on the wall, that reads 5:12 all the time since 1906, is still the original clock. It fell from the wall on the morning of Wednesday April 18, 1906 at 5:12 am (the morning of the great San Francisco earthquake) and stopped working. The owner of the bar at the time, hung it back up and just left it there never fixing it. The bar itself, and the floor, slant downwards because of the shifting of the soil during the quake and it is still that way. When you walk in, you feel like you are stepping back in time a hundred years. The feeling is unbelievable.

When Jack London frequented the location as a kid (he didn’t drink, just visited), he met interesting characters - seafarers that would come in with the tide and then leave with it when they were done drinking. One of the men he knew became the inspiration for the main character in Sea-Wolf. The owner of the bar at the time actually funded London’s first year at Berkeley, where London studied literature. The reason the bar is called the First and Last Chance Saloon is because during the prohibition, San Francisco was a dry city but Oakland wasn’t and those who would take the ferry into the city to work in the morning would stop in for their first drink and then their last drink when they came home. I love this bar! It is one of the most historical places in the Bay Area.

After I left LLNL, I went to work (luckily!) in Monterey with the Naval Postgraduate School. It was a stroke of luck as there is the National Steinbeck Center in Salinas. I went on several occasions. It is a great place. If you are ever in Monterey county, it is definitely worth the visit. I miss Monterey!

I remember during the two years I lived in Monterey, I would look out into the bay during a cloudy day and feel what Steinbeck must have felt when he wrote The Pearl. The pearlescent glow of the water is stunning. Then, I would take a walk on Cannery Row and imagine the scenery in the book that was inspired by it. It was really then that I realized how lucky I was to be able to walk in the literal footsteps of the authors whom I loved so much as a kid.

This is a wonderful post and I think Melissa had a great reading childhood, don't you? Thank you again for your guest post, Melissa!

Now, I have very thrilling news to share - I (as well as number of other bloggers) am hosting not only one, but two giveaways, or rather a giveaway and a contest.

THE CONTEST:
Would you like to read The Raie'Chaelia on an e-reader, but you don't have one? Don't worry, you might win your very own e-reader!

Rules of the contest:
Enter a drawing and win a free e-reader of your choice or a $100 gift certificate to your favorite store by answering the following question:

How did Heinhold's First and Last Chance Saloon get its name?

To answer the question go to this link and fill in the information (place answer in Message field): http://melissadouthit.com/contact-me-2/

Thank you, Melissa, for such a generous contest!

Good luck to everyone! If you'd like a bigger chance at winning a copy of the novel or an e-reader, consult THIS link for tour dates and check out other blogs hosting giveaways and the contest.
Posted by Irena @ This Miss Loves to Read at 8/04/2011

I've watched many movies based on Jack London's books but have never read them. As for Steinbeck, I've always been terrified of him!...I don't know why. However, I think it's beautiful that the tavern London used to visit still exists in its antiquity!

I read the review on The Raie'Chaelia. It sounds lovely! When it was likened to Eragon I figured I'd love to give this one a try. :D

The answer to the trivia question is listening to an audiobook while cooking. =o)

I don't think I've read any London or Steinbeck (need to rectify that!) but it's really interesting to read about the places that influenced their work; I'll keep that in mind when I do tackle their works.