Guys and Molls: Speaking in the Slang of the 1930s (Goodies Included) 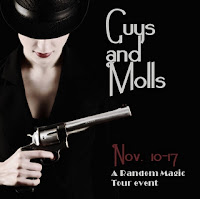 Guys and Molls
Event production by
Random Magic Tour
Sasha Soren (Random Magic)
SPEAKING IN THE SLANG OF THE 1930s
Can you imagine a gangster and a lady meeting in a bar during the 1930s? I sure can. But their intriguing meeting would have been recorded with different words than we use today every day and here's a challenge for you, guys and molls. I invite you to read the text this moll wrote for you in the slang of the 1930s and do tell how much you understood and learned anew.

I invite into the world of speakeasies and jazz. Enjoy.

*****
The moment he stepped into the speakeasy, his eyes were all for the pretty canary on the stage, her form togged to the bricks. She was a sweet patootie and she blew his wig alright. A few greaseballs were trying to get her attention, but he knew her type. She was too good to be anything but a moll. He sure wouldn't mind a honey cooler from her lips. He might just ask her to sing at his big jolly up next week. She looked determined, a hard-boiled muffin, and he bet she sure wouldn't mind performing in a cave full of grifters. He didn't exactly have a tin ear, but he could listen to her all day, even if the songs were off the cob.

Her blinkers fluttered as the tune ended and she looked straight at him when he inhaled the bitter sweet smoke from his snipe. She walked off the stage and intended to go past him, but he stopped her, gently wrapping his fingers around her arm.

"Kippy," she replied as if automatically. She seemed to be joed from up close. "You can take a powder now. Not interested."

"Not even in a kippy sum of suds? You'd be a perfect addition to the hop at my cave next week."

She smiled. "Keen. I'll think about it."

He returned the smile. "Abbyssinia then, kitten."

She gave him a wink before returning to the stage. A dame's peepers never lied and he knew what he'd seen in hers. Oh, it was definitely a date.

*****
To crack the slang code, refer to this website, lovelies. Did you enjoy the story?

WIN this hilarious deck of flashcards, and you'll have fun learning how to sling some lingo.

About: Get a line on this racket: flashcards feature famous one-liners and slang from 1930s gangster classics. Dish out some gangster speak and your pals and enemies will think you were made for the silver screen. 30 movie flashcards, boxed.

Preview: Check out the deck

WIN this great multi-title DVD, which includes four of the best gangster movies that were ever made. Host your own 1930s mobster movie marathon!

About: There are four vintage films included on this DVD.

CLIP FROM THE PUBLIC ENEMY

The Public Enemy (1931) - A taut, realistic time capsule of the
Prohibition Era, showcasing James Cagney's powerhouse breakthrough as
a streetwise tough guy who rises high in the bootleg racket.

HOW TO PLAY: There are four steps, but they're all fun and easy to do.

1. Leave a comment on this post, giving your take on this question: In the 1930s, would you have been hanging out with flappers, cops or bootleggers? Which group do you find most intriguing and why? Feel free to sign it with your own mobster nickname or syndicate, or
Twitter name.

Note: Please remember to include email address in entry form so you can be contacted if you win.

Additional info: International. DVD is region 1/NTSC but should play on multi-region player. Winner will be selected at random using random.org.
Ends December 15, 2011, midnight, EST.
Posted by Irena @ This Miss Loves to Read at 11/13/2011

What a fun post! I could just picture the scene:) I got the gist, but I had to check the link for some words. Very interesting!

What a fun post! I admit, I wouldn't have minded being a flapper.... I would totally want to rock one of those beaded dresses (especially if someone could give me a makeover to look like Louise Brooks)!

I liked learning some more slang -- now, I'll just have to find a way to work some of these into my everyday conversations.

Such freedom them for the women!! Must have been truly awesome to be able to wear those beaded dresses after being stifled in corsets. Now the slang part... very strange indeed.
Great post and thanks for the giveaway!!
Momkelly2003@yahoo.com

As I've been delving into speech of the 1920s-1930s for writing that I am doing, I came across many of the expressions you used -- and learned or validated what I already suspected: we as a nation or culture have become much more conservative in our use of swear words. One source told me things began to change during the Victorian era. I'd wager we're returning to that former era!

this is very interesting book and we read this book regularly and really enjoy the story of this book.

Thanks for sharing. Ive never read this book, but Ill be sure to post about it on My Site