The Lady and the Poet by Maeve Haran 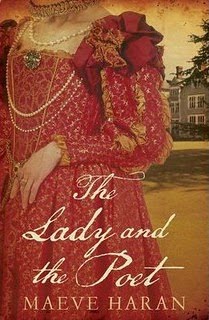 
SUMMARY:
Ann More, fiery and spirited daughter of the Mores of Loseley House in Surrey, came to London destined for a life at the court of Queen Elizabeth and an advantageous marriage. There she encountered John Donne, the darkly attractive young poet who was secretary to her uncle, the Lord Keeper of the Great Seal. He was unlike any man she had ever met—angry, clever, witty and, in her eyes, insufferably arrogant and careless of women. Yet as they were thrown together Donne opened Ann’s eyes to a new world of passion, and sensuality. But John Donne—Catholic by background in an age when it was deadly dangerous, tainted by an alluring hint of scandal—was the kind of man her status-conscious father distrusted and despised. The Lady and the Poet tells the story of the forbidden love between one of our most admired poets and a girl who dared to rebel against the conventions of her time. They gave up everything to be together.

THIS MISS REVIEWS:
This novel presents the love story of John Donne and the woman who became his wife, Ann More. The entire story is told from Ann’s point of view and to me, it was a delightful read from start to finish.

The author obviously did a very good research on John Donne’s and Ann More’s lives, his poetry and the time period. The language she uses for narration is very beautiful, quite lyrical and smooth, and it definitely matches the time period, as it sounds very authentic. I’d known some basic things about Donne from university classes, but I had no idea who Ann More was and I believe that Haran presented her very well. She gave Ann a very clear voice, making her a woman of that time, yet standing out with her intellect and wit. Ann fell in love with the rakish poet Donne, but didn’t make herself an easy target for him, but was, instead, pretty relentless in terms of sticking to her own ideals and principles, which I love in people in general. Ann More was unusually well-educated, and her mind and beauty attracted Donne, so much so that he fell in love with her and abandoned his rakish ways. Even his poetry changed from misogynistic verses to something that was simply much more, something that was deeper, more pensive and expressed his genuine love for Ann. The problem was, she was an aristocrat and he was a poet with a notorious reputation, so her father forbid the match, but Ann was stubborn and determined to be happy with John Donne and you know what they say: where there’s will, there’s a way.

This book does not feature many adventures and tension, if any. The only tension comes from the uncertainty and anxiety of Ann, who wanted to be with John Donne, but that was not easy to accomplish. Foremost, this is a beautiful love story, so the journey of this novel is an emotional one and it is slow-paced in a good way, as it allows the reader to truly savour the love story of John and Ann. I found it very touching and simply beautiful; in fact, I now see their story as one of the most beautiful real-life love stories.

I, personally, have nothing bad to say against this novel. I recommend it to all readers who like a good historical novel with a good amount of romance that is very pure, although passionate, and with great characterization and story development. All in all, a truly great and enjoyable read.

While I have not read a lot of Donne's poetry, I love how you conveyed in your review the growth that occurred in his writing over the course of his relationship with Ann. This really sounds like an interesting historical novel, and one I think I would enjoy.

Your review is amazing-your summary of the story, sum up of the style of writing, and insight about the characters. I definitely want to read this now!

Great review. Sounds like a book for me if there is not anything negative to say about it

Cool! I love that time period and location. Can't wait to check it out.

Lovely review! I actually know nothing about either of these characters (except for having heard of John Donne), but with how lovely this review sounds, I'm thinking it would be a great way to learn.
Lovely review!

Great review, Irena! I am going to add this one to my TBR....

Oh wow, what a lovely review. It sounds so romantic. I love a determined heroine. I will keep my eyes peeled for this.

I love Donne. Thanks for bringing this book to my attention!

This love story seemed a difficult read for me at first with the English style language but soon I lost myself in the love story. I am not very interested in history but found myself researching the characters in this book after I read it to learn more. I longed to go back to this book which is not the case for some books I read. A great love story and for me an added bonus of some historical knowledge as well.