When I was a university freshman, I had a professor who lived for political correctness and feminism (and I suppose she still does). She introduced us to politically correct fairy-tales with a very feminist flavour. She had us read Cinderella from James Finn Garner’s book Politically Correct Bedtime Stories: Modern Tales for Our Life and Times, which is a parody of this strange modern tendency to be as politically correct as possible. Today, I would like to briefly introduce this book of PC fairy-tales and focus on Cinderella to give you an idea of what the book is about and how PC stories are written. 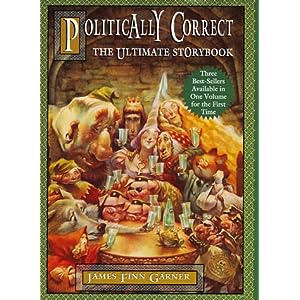 Before I begin, I must make two confessions: I am decidedly against political correctness and I am not a feminist. PC, to me, is a disease that makes people fear the truth and embellish it with foreign-sounding, hardly understandable words/phrases. It actually reduces the importance of something. I think that by saying people still keep slaves in the 21st century, you will immediately understand what I am talking about and the word slave will send a signal into your brain that this is bad. If I replace the word slave with the phrase personal unpaid labourer, will you really think that being such a labourer, as opposed to being a slave is so bad?

(P.S. If you support political correctness, please do not feel offended. This is all my personal opinion.)

This is partly what the book tries to convey and it is a funny parody of this modern need – PC – to not say what you mean. The book changes the plots of famous fairy-tales so as to make them more “morally appropriate” for children, according to the PC policy. Feminist elements are added, turning female villains into good people and male heroes into chauvinistic, sexist idiots (even the poor seven dwarves from Snow White and the Seven Dwarves). It also includes modern elements, like cars and spas, and has a very moralizing tone throughout.

I decided to discuss Cinderella in particular because I have a copy of the story at home. This Cinderella is very feminist. This aspect is even covered with spelling: for example, woman is spelled as wommon (avoiding the man morpheme) and in plural womyn. The Fairy Godmother is called Fairy Godperson (very PC) and the fairy is actually a man this time. Cinderella really wants to go to the royal ball, but her Fairy Godperson is reluctant to dress her for the ball, saying in a PC, feminist manner,

“So, you want to go to the ball, eh? And bind yourself into the male concept of beauty? Squeeze into some tight-fitting dress that will cut off your circulation? Jam your feet into high-heeled shoes that will ruin your bone structure? Paint your face with chemicals and male-up that have been tested in nonhuman animals?”

Of course, Cinderella manages to go to the ball nonetheless. At the ball, all women hate Cinderella because all men are after her like rabid dogs. They engage in a quarrel that makes Cinderella forget about her curfew and her beautiful, tight dress disappears, leaving her in (comfortable) peasant’s rags. The ladies love her look, realising how mean men are for having forced them to dress up in such uncomfortable clothes and then, they kill all the men in the kingdom, start the Cinder Wear line of comfortable clothes for womyn and live happily ever after (until it lasts because we may assume that eventually, without reproduction, the all-women kingdom will be gone).

Whether you support PC and feminism or not, I truly recommend you read this book. It’s a great parody and a fun(ny) read.

What a fun twist on the story although I'm think killing all the men is a bit of extreme Feminism and not really in line with the actual goals of feminism.

And thanks for adding my link!

I do like the twist, but it would irritate me too. i would rather have a pretty dress than peasant rags, I dress for myself

I never read this book but was also introduced to it in college. Personal, I have no trouble with the universality of man representing us all, but then I am pretty old school. Great post. I always look forward to this, even though I am late getting to it.

I can't stand political correctness either. It has gone completely overboard. And I wouldn't class myself as a feminist. I love that my husband takes good care of me. Hee hee. In my last job my boss was a feminist. When I left she gave me a book called "Why Girls Are Best." It made me laugh so much.