I discovered a great meme on Amy C's blog Romance Book Wyrm. The idea is that on Monday, Amy posts a picture on her blog. If you choose to participate, you write a short story based on the picture (around 350 words, but more is allowed) and post it on Friday.

I decided to give this meme a try because I think it's a really wonderful idea to exercise a blogger's imagination. Since this is my first Flash Fiction post, I didn't exactly give it my best because I'm still adjusting, so to say. But I did come up with a story (so far untitled) that I hope you can enjoy. It's a bit dark as the picture is delightfully dark.

The picture this week: 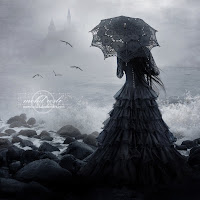 She waited as the dawn of the new day began to chase the swirling silver mists away and the image of the castle husked itself out of the early-morning gloom. The majestic building, perched atop the high cliff, reigning above the gray, wild sea, took her in so warmly long ago. Then, it cast her out coldly, as if she had been a leper. They forgot what she ever meant to them the moment he took his last breath and drifted into oblivion, never to offer his brilliant smile ever again, the smile she loved so much.

The sycophants lied to him when she first placed a foot over the castle’s threshold, telling him she belonged to the family now. They knew that everything they ever wanted to have depended on the way they behaved towards his bride. So they loved her with fake smiles, but despised her in their hearts and when he died, they did not feel sorrow as they should have, as she had. To them, his death was an opportunity and she, nothing but a usurper in their eyes, was advised to leave. She was not of noble blood, therefore nothing belonged to her, not even the gravel of the courtyard, let alone her own child. They would not even let her kiss the girl’s sleeping brow before they forced her to the mainland, their venomous threats a constant echo in her head.

She may have been a prince’s widow, but that meant nothing since she had no rights. They were so in love that they did not think about the law. They trusted everyone so much that they did not dare suspect they should be wary of his family. So, they savoured every moment of their marriage and forgot that perhaps, the will should be changed; that perhaps, there were snakes in the castle, ready to strike; and they did. He never recovered from the illness that began as a mere chest cold. She had not recovered from her great loss, first of her husband, then of her child, now at the mercy of those vipers that would raise her in a manner that would make the little girl forget she ever had a loving mother.

Resentment turned to hatred and hatred was a flower in the deserted garden of her heart that she never failed to water. Yet, the flower was always parched and the only thing that would soothe it was revenge.

She stood on the beach, listening to the waves roaring in the approaching storm, sounding just as messengers of doom should, she mused.

She had found a way of being powerful, of being able to inflict those she wanted with fear and demand a pound of flesh from each one of them. Suddenly, the mists swirling around the turrets resembled a shroud and rightly so. They would need it; every single one of them, except for her little girl. She had not thought about the future yet and, since her desire to seek satisfaction in a bloody vendetta made her sacrifice so much, the future with her child seemed complicated and almost impossible, but as long as the girl was safe and happy elsewhere, her mother would be content.

It would happen this evening. The weather in this area was moody and the sun might pierce the dark sky at any moment, despite the promise of a heavy storm. The light of day was not her friend anymore, but that was the price she was willing to pay. She smiled to herself, looking forward to the evening ahead.

Her revenge would be written in blood.

Note: Although I read paranormal fiction among other genres, I prefer to write about "real" things, but I wanted to include a little bit of the paranormal into this short piece to know how it feels to write it down, not just read it. It feels nice.
Posted by Irena @ This Miss Loves to Read at 2/11/2011

I am so happy you joined in :D
Great story too, I hope to see more from you

My story is at my other blog
http://blodeuedd83.livejournal.com/

Though it's part 4, lol, yes, I had issues getting an ending

That is a wonderful tale Irena. I get the feeling you've written before. :)

Wonderful little piece you've written, can't wait until she has her revenge!

I flash in mostly paranormal or urban fantasy, vampires are my friends, but not in this week's flash.

Glad to have you join us!

Its really well written! Maybe you should complete it and reveal to us the gory details of her revenge!

So wonderful to read your flash, Irena!

I wasn't expecting the paranormal twist at the end. I think a one word title such as 'Vendetta' or 'Vengeance' would be a fitting title. I think most of the time I end up taking a word I've used in the story at some point for my titles :).

So good to have you!

I've only just seen this. Beautifully written! I hope you write a continuation, would love to see what happens next.