Friday is for Fairy-Tales: Peter Pan

My post today is about: Peter Pan; or, the Boy Who Wouldn't Grow Up by J.M. Barrie

To me, Peter Pan has always been a fairytale-like story. Peter Pan is a boy who can fly and lives in a land - Neverland - where a child never grows up. One of his friends is a fairy, Tinkerbell. There are mermaids, too. The adventures involving Indians and pirates may not seem very fairytale-ish, but they can happen in a fairytale. After all, everything is possible in fairytales.

I've heard people complain about the moral message, or the lack thereof that this story conveys. After all, we can't avoid responsibilities in life (as Peter might show by not wanting to grow up), but to me the message has always been that we must never "kill" the child within us. When we grow up, we must keep a small part of us that was once a hopeful, innocent child who could believe without cynicism. Also, the story is pure delightful escapism and should be enjoyed as such.

My favourite part of the story has always been when Peter Pan saves the Indian Princess Tiger Lily at Mermaid's Lagoon and battles the pirates, including his nemesis Captain Hook. I must also confess that I have a soft spot for Peter and Wendy, the girl whom he takes into Neverland (along with her family) on an adventure. I liked to believe that they would both grow up, not only Wendy, and Peter would come to live in her world - if you know what this romantic girl means.

Peter Pan; or, the Boy Who Wouldn't Grow Up is a play, but it can also be read in its novelized form - Peter and Wendy. 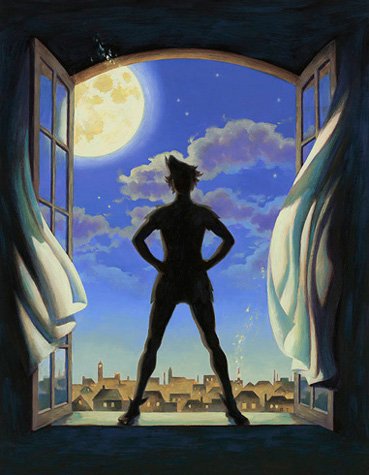 Oh, I love Peter Pan, too! And I think you are right about the message being always to keep a bit of a child alive inside us.

Rereading this novel last year was a bittersweet experience because I think it's actually about the inevitability of the death of everyone's innocence. Peter is just lucky because, by some freak of ontology, he never grows out of it. He's the spirit of boyhood to me, and we all love him for it, although (like Wendy) we all know that he's never going to love us back because he must be eternally free.

PS -- Irena, have you seen the movie Hook? If so, what did you think of it?

I always loved Peter Pan when I was young (the disney version), but I love the story more as an adult after having read Barrie's novel. It was suddenly more than just being carried away to play in Neverland. I especially love the parts about Wendy's mother, of her own dreaming.

I like that you included this story in your Friday is for Fairytales.

I'm wondering if I've ever read actually read this or if I've only seen the Disney film many many times...I should definitely read it!

I love Wendy's mother, too. She gives us a glimpse of what Wendy might be as a grown woman--and yet she is as elusive to Wendy as Peter is!

I have seen a lot of versions of peter pan, but I always loved the original and the first one, I think it is the best