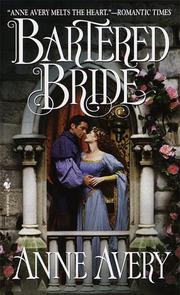 SUMMARY:
Lady Alyce Fitzmartin is forced to marry the arrogant Robert Wardell, the answer to her father's debts, and a man Alyce is certain she will never love. Yet an even more grave situation lies in wait. For Robert may not survive the impending overthrow of the King, unless he uses his new wife as a pawn. But one glance into each other's eyes sparks an unexpected yearning. And while England burns with the fire of revolt, Robert and Alyce discover a passion for which both must gamble their lives.

THIS MISS REVIEWS:
Bartered Bride is a historical romance that sets itself apart from most works of this genre, primarily because it does not only focus on the romance and the passion that this genre requires, but also on the historical, political and social aspects of its setting.

Lady Alyce Fitzmartin is the daughter of a baron who can trace his lineage back to the Conqueror. He is, therefore, old nobility, proud of his position, and he is fittingly arrogant and boorish. Alyce is a gentle, yet determined lady who had to learn to take care of the manor and its lands at a very young age, with whatever means she could find, for although she is of noble blood, her family is in desperate need of funds. For this reason, the baron arranges Alyce’s marriage to a wealthy London merchant, Robert Wardell, who is not a nobleman and Alyce feels betrayed because she is marrying below her status and for the sake of money. She feels even more betrayed when she learns that her ever pragmatic husband, who is a stranger to any kind of romance, married her for political reasons only. Under such circumstances, the newlywed couple struggles with coping with their blooming feelings for each other, hindered by pride, old wounds and politics. Eventually, the situation in England puts them into jeopardy and if they don’t tread carefully, there might be serious consequences for them both.

The story takes place in 13th-century England during the reign of Henry III and the second uprising of the barons led by Simon de Montfort in 1263-4. Avery describes the civil conflict in a clear and simple way, incorporating it into the story naturally. The historical aspects are covered well, as are the manners of that time. The setting is authentic and makes the story much richer, as the focus is not only on the developing romance between Robert and Alyce, but also on the background of the time in which these two characters live. Robert’s motives are realistically explained, as is the fact that because of their very different origins, Robert and Alyce stand on opposite sites, which threatens their love greatly. Through Robert, the rising class of merchants is presented, which, for a history enthusiast like myself, was a very welcome touch.

The romance is not neglected; it is still the most significant part of the novel and it develops gradually. Robert and Alyce are allowed to evolve over the course of the novel, and the romance evolves together with them. There is no instant attraction, so they way they tentatively discovered each either was quite delightful to observe. Robert is a proud merchant, an intelligent and brave man who makes money with his diligence. Alyce is his worthy mate, spirited, clever and willing to learn.

All in all, Bartered Bride is a delightful historical romance that should please any fan of the genre.

This is an interesting in romance genre - a lady marrying below he status for money. The historical era in which it is set is intriguing also. Great review!

I love historical romance novels. ^.^ This sounds like a good one. Great review.

This is set much earlier than the romance I usually read but the events occurring sound really interesting-thanks for bringing this book to my attention.